The use of lithium batteries to power our ever-shrinking electronics is growing at a rate of 1.63 batteries per person, per year, reports recycling service RRS. Increasingly, these lightweight, power-dense batteries power everything from our phones to our cars. One report projected a compound annual growth rate of 17 percent in the lithium-battery market by 2021.

Electronics recyclers have been tracking the rise of lithium batteries and retooling their operations to take advantage of the high-value materials present in these technologies. (Cobalt shot up by 129 percent in 2017, and nickel saw its highest value since 2014 in April of 2018. Of course, new technologies are always on the horizon, and a prototype lithium-iron-oxide battery could soon send the cost of cobalt plummeting.)

Regardless of the reclaimed material, electronics recyclers know one thing is unlikely to change about lithium-based batteries: When not handled correctly, this technology can be dangerous. In a way, lithium batteries are too energy-efficient to be completely safe; they pack a lot of voltage into a very small space, and when that energy escapes control, the results are searing heat and flames. It doesn't help that these batteries must use organic-based electrolyte, which is flammable by nature.

What Is a Lithium Battery, and Is It Different Than a Lithium-Ion Battery?

For our purposes here, the term "lithium battery" refers to any lithium-based battery. Broadly, these fall into two classes:

In addition to the chemistry that powers a battery, safe treatment can depend on the battery case. Sometimes these are cylindrical cells or other hard-shell cases, but lithium polymer batteries are popular for cell phones and other small electronics in which users prize lightness. These pouch batteries are easy to damage, especially when they enter the waste stream, and damaged lithium batteries create a serious fire risk.

Just like traditional lead-acid batteries, these lithium-based technologies consist of an anode, a cathode, and an electrolyte. During discharge, lithium ions flow through the electrolyte, from the anode to the cathode. Ions move in the opposite direction as you charge the battery. 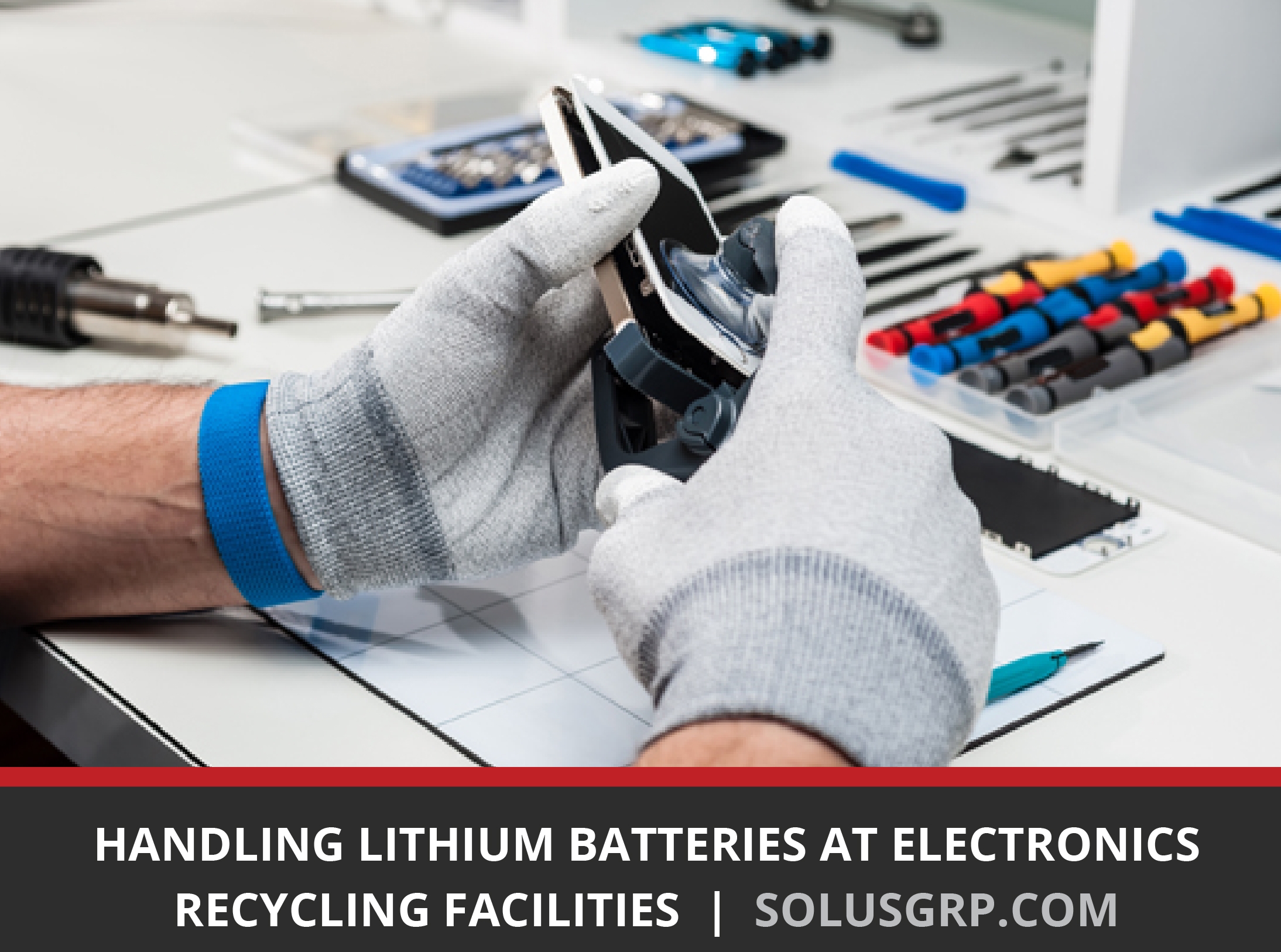 Damaged batteries can short-circuit, translating energy into heat. This is called thermal runaway, and it's what causes most lithium battery fires. When enough heat builds up, the organic electrolyte in the battery combusts, leaping from intense heat into actual flames. If this occurs in a single battery cell, it can damage nearby cells within the module, which consists of multiple battery cells, and the pack, which is built of modules. It's easy to see how quickly the problem can compound, especially in a facility full of lithium batteries.

To make matters worse, the electronics recycling process presents many opportunities to inadvertently damage lithium batteries. These include:

Fires caused by lithium batteries have been reported to burn between 400 and 1300 degrees Fahrenheit. If the batteries are contained or under pressure, they may explode. Now, it's likely that safer high-capacity batteries are on their way. Every manufacturer is working on solving the problem of safely containing high-density energy. In the meantime, though, electronics recyclers must be very careful when they handle these objects.

Clearly, used batteries are an important part of the recycling stream. Unfortunately, most municipalities can't simply instruct residents to throw their batteries into the single-stream, curbside collection system. The risks of damage are too great, and the costs of fire or explosion too high.

That means residents must find organized collection sites that are equipped to safely take in batteries. In fact, MRFs and electronics recyclers themselves can be part of the solution. By working with local government and business partners, those in the recycling industry can help to set up safe, convenient collection points for old electronics and batteries. The easier it is to recycle batteries, the more materials there are to sell to reclaiming operations, and the fewer stray explosive items end up in the standard recycling stream.

While no one can deny the challenges of handling lithium batteries at electronics recycling facilities, the fact remains that these power sources contain valuable materials, ripe for reclaiming. And until someone invents a completely safe lithium battery, the best ways to maintain safety at the electronics recycling facility are to prepare, train, and provide the right tools.

"Sustainable Materials Management (SMM) Web Academy Webinar: An Introduction to Lithium Batteries and the Challenges that they Post to the Waste and Recycling Industry." EPA. U.S. Environmental Protection Agency, 22 Mar. 2018. Web. 18 May 2018.