A single sheet of paper weighs almost nothing; let it go, and it'll glide to the floor like a feather. Drop a 1,000-pound bale of paper, though, and you can start to appreciate its origin in the trunks of mighty trees.

There's probably a neat metaphor in there somewhere — for the power of choosing to recycle paper in the first place, maybe — but for the 1 million-plus workers in the recycling industry, the tremendous weight of accumulated ledger only means one thing: danger.

"Despite its virtuous image as one of the original green industries, recycling is dirty, labor-intensive work," wrote Brian Joseph in the nonprofit news outlet "FairWarning."

In 2014, workers in sorting facilities and recyclable collection were injured at rates three times higher than their peers in the manufacturing industry. This paints a bleak picture. But removing hazards from paper recycling facilities boils down to three totally attainable innovations: staff training, managerial oversight, and ergonomic equipment that can take over the most dangerous jobs.

Solus Group can't help with the first two (this overview from the Occupational Safety and Health Administration is a good place to start for training ideas). But for the third, we’ve got you covered.

The Ergonomic Hazards of Sorting Paper for Recycling

When waste paper reaches the recycling facility, it has to be sorted into at least five different grades. Some operations divide paper into as many as 51 grades. All that sorting creates massive piles of paper, which has to be moved into hoppers or even dumped directly into an industrial wash basin.

Insufficient lift equipment can require workers to bear loads that are far greater than safe lifting limits. Dumping equipment that lacks full-cage guarding can drop bales of paper onto workers, causing serious injury or death. Many bales in the paper recycling industry weigh more than 1,000 pounds. Only equipment designed to handle such a heavy load can safely move them from the floor into wash baths or slurry generators. 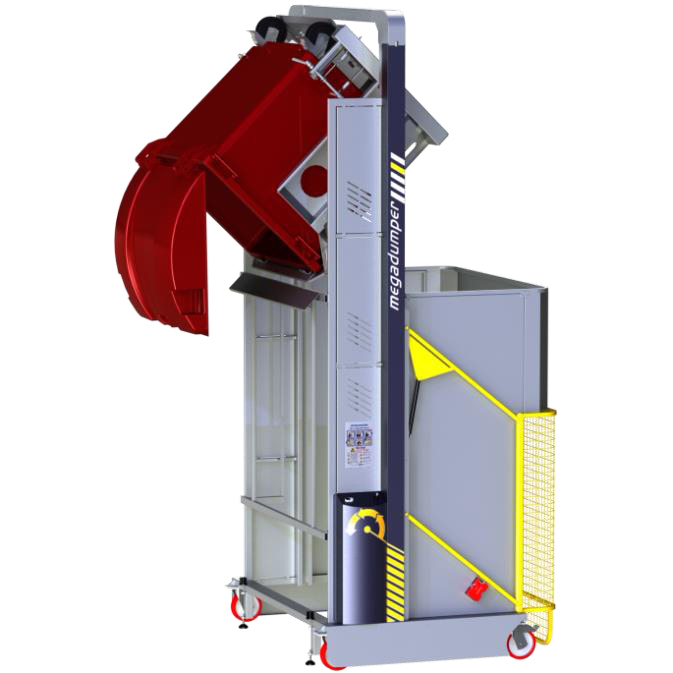 The market is flooded with lifting equipment that can handle large paper bales. There are even machines designed to empty containers. But the MegaDumper Bin Tipper is the only piece of equipment that can both lift and dump such heavy loads without exposing staff to common hazards. A steel cage protects workers from spillage. Plus, integrated, heavy duty casters allow you to reposition the unit wherever it’s needed, without any loss of stability.

Speaking of stability, most high-capacity dumping machines direct loads along an arcing, extended path, up, forward, and down, like a candy cane. That design changes the center of gravity on the whole device. As the load moves forward, the machine suffers an uneven distribution of weight on the frame.

When you're dealing with 1,000-pounds of compressed paper, that's not a good thing.

The MegaDumper Bin Tipper features an innovative lift-and-tip design. The load travels vertically in a straight line, and tilts at a 45-degree angle. There's no change in the center of gravity throughout the whole process.

The standard design of a MegaDumper Bin Tipper handles loads up to 1,653 pounds (750 kg). If you regularly deal with heavier bales of paper, though, custom builds are available through the manufacturer, Simpro.

As of 2013, more than 34 percent of municipal solid waste was recycled, and the trend shows no signs of slowing down. There's no reason workers in this growing industry should be exposed to ergonomic risks when there's equipment that can stand between them and danger.