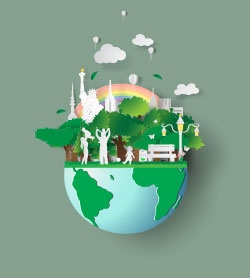 Since its inception, the modern global recycling industry has developed a worldwide infrastructure. In the U.S., recyclables are separated out at material recovery facilities (MRFs), packed into bales, and sent to other nations, which house the world’s processing capacity. More often than not, until recently, that meant China.

Of course, plenty of U.S. recycling goes elsewhere; the U.S. recycling rate for all materials is as high as 34 percent, so there’s plenty to go around. But there has historically been a strong economic incentive to favor China as an export market for recyclables.

Because the U.S. imports far more goods from China than they export, shippers end up with lots of empty shipping containers on the journey back from the States. That’s not good for business. Following the precepts of global supply and demand, this time as it relates to the service of shipping, costs to send goods from the U.S. to China plummeted.

That made shipping relatively low-value items, like post-consumer waste, from the U.S. to China incredibly cheap. Chinese markets built a strong processing sector to transform all that American garbage into usable raw materials, and everyone got paid.

At least, that’s how it used to work.

If you’re reading this article, odds are you know what happened next. The Chinese government’s recent decision to ban virtually all imports of post-consumer waste flipped the entire recycling ecosystem on its head.

Ostensibly, China’s leadership enacted the ban for environmental reasons. They didn’t want to be the world’s dumping ground, and the nation is pursuing ambitious sustainability goals. Then there’s the fact that keeping the entire recycling stream domestic holds onto all the cash that would previously have sailed out of the country. No doubt that was also a factor.

Regardless of why the Chinese government implemented the National Sword policy, as the recycling ban is known, its effects were immediate and dramatic. In the U.S., MRFs found themselves with no market for their product. Seventy-nine percent of U.S.’s 6.3 billion tons of plastic waste ended up in landfills, or, worse, the natural environment. Only 12 percent of the plastic created since its invention has been incinerated.

Very little of the U.S. supply of plastic waste went to China in 2018, because it was no longer allowed into the country. Instead, during the first half of 2018, exporters sent ships loaded with these plastics to Malaysia, Vietnam, Thailand, and other nations around the world.

Now many of those countries are also restricting imports of plastic waste. American exports of recaptured plastics to Thailand leapt by nearly 7,000 percent in the months following China’s import ban. Exports to Malaysia rose more modestly — but still by hundreds of percentage points.

By the end of 2018, plastic export numbers to both Malaysia and Thailand had fallen; those nations had elected to thin the flow of recyclables across their borders. They were beyond capacity. In fact, Thailand has announced that it will end all imports of scrap plastics by 2021.

India’s doing the same thing. As of March, 2019, India had pushed back the deadline on a total scrap plastic import ban until the end of August of that year. In the first 11 months of 2018, the U.S. sent more than 130,000 tons of scrap plastics to India. Starting this fall, the nation will have to find new takers for that load.

In 2018, Malaysia imported 19 percent of U.S. scrap plastic exports. India imported 12 percent. Hong Kong and Canada imported 11 percent and 13 percent respectively, and they may be among the last two nations willing to buy scrap plastics from the U.S. left in the world in the span of a few short years.

In short, who are the new importers of U.S. scrap plastics and other recyclable materials? We don’t know. They haven’t raised their hands yet. That leaves us with the longer, harder solution to the problem of recycling capacity: Expanding the nation’s infrastructure from the ground up.

For the four months beginning in November 2018, U.S. scrap exports in plastic and paper fell. As other nations restrict imports of recyclables, or ban them outright, the U.S. is losing export opportunities.

This certainly sounds like a niche in the market. Perhaps the ideal solution is to build up the U.S. capacity to process post-consumer waste, particularly in plastics. That’s precisely what at least two U.S.-based companies who spoke at the 2018 Paper and Plastics Recycling Conference in Chicago are doing.

One company made a $10 million investment in a processing facility that transforms LDPE film scrap into plastic pellets, ready for reuse in the manufacturing market. Another kicked off the process of adding processing units that produce pellets to an existing material recovery facility.

While these stories are certainly anecdotal, and the U.S. recycling market would need far more than two companies to invest in processing capacity for recyclables, these examples show that the strategy is possible for some.

Earning an ROI in Material Handling at Recycling Facilities

If you’re thinking about helping the U.S. expand its domestic production of recycling — being part of the salvation of residential and commercial recycling programs across the nation, and, perhaps one day, across the world — the main barrier, as always, is probably cost.

Processing facilities are expensive. However, with the right approach to operations and access to the manufacturing markets, initial investments can pay off over time. One way to run a lean operation is to streamline material-handling processes, which is a large share of the labor cost for many recycling processors.

Automated systems handle the bulk of the sorting, but it can get quite expensive to staff a facility. Only human workers can handle the wide variety of non-standardized tasks that arise in a working MRF, and many of those tasks will involve material handling.

Cut down on staffing costs by providing material handling equipment that will allow a single user to perform tasks that would otherwise take an entire team. The MRFs challenge is to accomplish safe, efficient accumulation and movement of heavy bulk materials. A combination of three fleets of equipment will make this a one-worker job:

These material handling devices work in concert. Workers on the sorting lines can unload contaminants directly into a nearby Mobile Garbage Bin. When these bins reach capacity (which can be up to 290 gallons in a single unit), a single staff person can use a Power Pusher to wheel the bin across the facility to the dumpster storage area.

Power Pushers are hand-held devices that engage a motor to push or pull the load, while remaining under full control of the user. They remove the ergonomic risks associated with moving heavy loads across the floor, and obviate the need for whole teams to safely transport a loaded cart.

At the dumpster, the material handling challenge becomes emptying bins from floor-level. This is where Bin Dumpers come in. The employee simply wheels the Bin into the Bin Dumper’s cradle; closes the safety gate; and presses a single button. The Bin Dumper lifts and empties the full load into the dumpster without risk to the user.

In the end, material handling seems like a small part of the overall problem. With the cost savings and limited staff these machines afford, though, they could go a long way toward helping the U.S. build its recycling infrastructure for the next generation. Based on what we’re seeing today, that’s our best hope for confronting the recycling export challenge.