Top 10 OSHA Warehouse Citations to Watch Out For

You may have heard horror stories about massive fines issued by the Occupational Safety and Health Administration. If you take safety seriously at your facility, though, you have nothing to fear from OSHA. 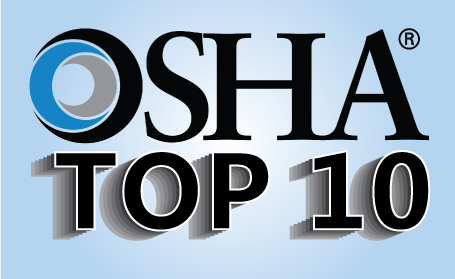 If, on the other hand, you're reporting the same sort of accident over and over, you may indeed receive a visit from the OSHA inspector. Agents look for recurring problems when deciding where to stage an inspection.

So what sorts of problems do OSHA inspectors find? The OSHA Pocket Guide on safety in warehousing lists the 10 standard violations that show up in OSHA citations most frequently. Here they are, along with a few tips to avoid making these mistakes in the first place:

Between 2009 and 2012, fatal injuries involving forklifts actually increased in the United States. In 2012 alone, 94 workers lost their lives because of lift trucks. An earlier study found that adequate training and policy would reduce error rates among forklift operators by 70 percent. The numbers prove that training saves lives.

Employers are required to label all hazardous chemicals in the workplace. In fact, there's an elaborate Hazard Communication Standard in place. Employers who don't follow this rule often run afoul of OSHA inspectors.

The OSHA rules on wiring methods, components, and equipment can be found in standard 1910.305. Check it out to make sure your facility complies.

There are strict requirements for every component in a facility's electrical system. Consult OSHA standard 1910 Subpart S for the full set of rules.

5. Failure to Properly Guard Openings in Floors and Walls

Stairways, mezzanines, and pits are common features in warehouses. According to OSHA, any opening in the floor or walls needs a barrier to prevent workers from falling. Barrier Rails from Solus Group serve this purpose nicely, and have extra strength to survive the odd forklift collision.

Every workplace requires at least two easily accessible exits, and facilities with more staff might even require more than that. Furthermore, exits must be "clearly visible and marked by a sign reading ‘Exit,’" according to OSHA standard 1910.37(b)(2).

Most moving parts on mechanical power-transmission devices must be covered by a guard. If you have exposed belts in your workplace, you could get a citation from the OSHA inspector.

Workers who are subject to contact with "dusts, fogs, fumes, mists, gases, smokes, sprays, or vapors" must use respirators to avoid illness. Employers must provide this breathing protection.

Lockout and tagout systems keep staff from inadvertently using machinery without the knowledge and consent of their co-workers. Ignore them at your peril.

10. Placement, Inspection, and Condition of Fire Extinguishers within the Facility

These are simply the 10 most-cited violations in American warehouses. Avoid them and you won't have to worry about OSHA. But if you don’t comply with any of these regulations, you’re much more likely to fail your next OSHA inspection.