Why Clean Recycling Is More Important Than Ever

Clean recycling is a catch-all term that describes high-quality, uncontaminated bales of post-consumer plastics, metals, or paper. It's also the key to keeping the recycling industry healthy, especially the plastics market.

There are a few reasons for this, but perhaps the most important is the simple economic principle of competition. What competes with recycled plastic? Virgin resins, or original, raw plastic made from oil, coal, or natural gas. In order to attract buyers in a competitive market, recycled plastic must match the quality of newly manufactured plastics, insofar as that's possible.

But market competition has always existed. Some of the pressures on materials recovery facilities (MRFs) to churn out ever-purer bales come from recent developments. In fact, the plastics recycling industry is facing a period of upheaval as Chinese policies change the rules.

The Development of the Global Recycling Industry — And Recent Changes

To understand the new challenges to MRFs in the West, we have to go back to the development of this global industry. As municipal recycling programs began to proliferate in U.S. cities, an extensive network of MRFs also sprang up. These facilities don't actually process recyclables into new materials; their role is to sort materials, bale them up, and sell them to processors. 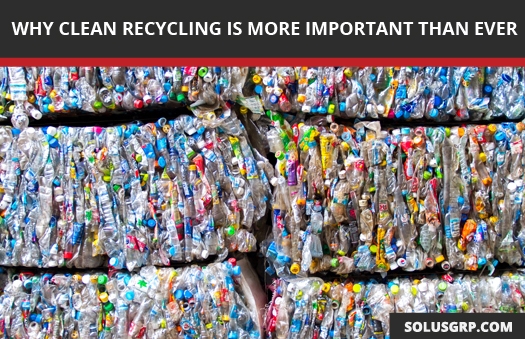 But while there are plenty of MRFs on U.S. soil, there aren't enough processors to handle all of the nation's recycling. The market developed this way, in part at least, thanks to the U.S. trade deficit with China. Container ships are constantly streaming from China to U.S. ports, loaded with goods. The trouble is, shippers have trouble finding U.S. exporters to make the return journey profitable. They have to offer deep discounts to attract business, and for years, a lot of that business came from MRFs.

Chinese recycling production facilities were hungry for recyclables to feed the nation's huge manufacturing sector, and shipping was cheap. In fact, it would have been more expensive to send recyclable bales to U.S. processors by train or truck, so a circular trade system developed: MRFs collect U.S. recyclables then sell their bales to Chinese processors, who churn out raw plastics for the manufacturing market. Many of those manufactured plastic goods would then return the the U.S. end market. At one point, reclaimers shipped approximately 30 percent of all recyclables collected in North America to China for processing, reports Bloomberg.

Recently, however, the Chinese government banned imports on most types of post-consumer plastics, citing environmental and health concerns. The market for reclaimed plastics just got a lot smaller. In the new world of recycling, the quality of a bale of post-consumer plastics could be the difference between finding a buyer and stockpiling bales of recyclables — or, worse, sending them to the dump.

Of course, market forces aren't the only reason residents should strive to keep improper items out of their recycling bins. There's also the threat of safety issues and increased costs at home. Take plastic bags, for instance, which most municipalities do not collect in curbside bins for recycling (You can find a nearby drop-off location for bags and other types of plastic film here.).

Plastic films and bags tangle in the MRFs’ sorting equipment, sometimes requiring the entire line to shut down while staff clear the jam. This inefficiency requires MRFs to charge higher rates to municipalities — which are, of course, funded by residents.

Ultimately, it's up to those residents to practice clean recycling. If contaminants don't end up in curbside bins in the first place, they'll never slip through at the MRF. The market's growing emphasis on quality of bales doesn't just reward clean recycling; it practically demands it.

Become a subscriber to receive exclusive deals and product news.